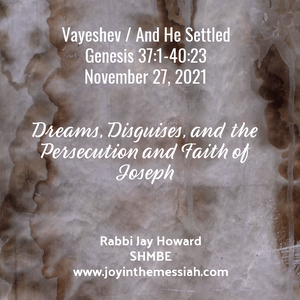 The Descent, the Ascent and the Garments We Wear…

Vayeshev opens with the story of Joseph bringing a bad report to Jacob regarding the sons of Bilhah and the sons of Zilpha. Chapter 37 continues with the special ornate garment Jacob made for Joseph and the 2 dreams. Things don’t go well for Joseph after that; he is mocked, striped of his garment, thrown into an empty cistern, and sold for 20 shekels to Midianite merchants.
Meanwhile, Judah has three sons, Er, Onan, and Shelah. Er is married to Tamar, but is found wicked and killed by God. The second son, Onan is also found to be wicked and he too is killed by the Lord. Judah sends Tamar away to live as a widow, in her widow's garments. Judah’s wife passes away and he finds himself with Tamar who he thinks is a harlot. Later, she confronts Judah; he admits his fault, and accepts her and the twins, Perez and Zerah.
Joseph has since been purchased by Potiphar, and after finding favor with him, was appointed to be Potiphar’s house attendant. He is accosted by Potiphar’s wife, she rips his garment and fraudulently reports him. Joseph is sentenced to prison where he comes in contact with the cupbearer and the baker.
This parsha ends with Joseph interpreting the dreams of the cupbearer and the baker, one will live and be restored, the other, the baker will be hanged. Joseph had asked them to remember him, but ‘The chief cupbearer, however did not remember Joseph; he forgot him.’ Genesis 40:23.
How can we bring all of this into our world?  How can we related the physical with the spiritual?
We too, wear garments of praise or we wear garments of heaviness; we, too live in the flesh, and then ascend into the spiritual. We too seem to live in two different but so often colliding worlds.
Garments are a sign of favor and can be a sign of demotion:

Our garments will be as ashes and filth during our descent, and become garments of praise and righteousness as we ascend…

We have our garments of flesh; garments that are stained, soiled and used. We trade them in for the garments of righteousness, and the garments of praise.  As we leave the filthy garments, we ascend into the heavenly realm, the Kingdom on earth that we can be a part of as we enter into Yeshua and the Torah. The key is to realize that we are in a descent, and that our garments are that of widowhood, for we had not yet become the bride that we are to be.  We adorn ourselves with the righteousness of the Messiah and the righteousness of the Torah, the very true word of Elohim.
Revelation 14:12 ‘Here is the patience of the saints; here are those who keep the commandments of God and the faith of Yeshua.’. 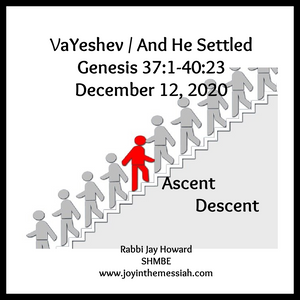 In Vayeshev the spirit of deception continues as we see how easily the events of envy and animosity continue through the blood lines. When ignored, these character traits will either master us or consume us as unwilling participants. If we trust the Father and obey His Word, we will overcome the deception. The deception might be hidden and will be the descent. The truth will come as the ascent.
An excellent example is Joseph. His descent was the pit followed by the ascent of Potiphar appointing him to overseer of his household. This was followed by the descent into prison, followed by the ascent given to him by Pharaoh. This is completed in the next parsha when Joseph is given garments of fine linen.
As in the parsha Toldot where Jacob uses hairy garments to deceive his father Isaac, garments represent identities, power and even deception.  In Vayeshev garments are used to disguise, deceive and to identify. Garments give people their identities, either positive or negative.  Here we see external appearances drive the narrative, while the inner agendas push through.
Jacob’s coat has often been described as ‘a coat of many colors’, the Biblical text “ktonet passim’, has been translated as “a long colorful coat”, or “an ornamented tunic”.  Clearly it was something special, unusual, and meant to differentiate Joseph from his brothers.  The favor of this garment gave Joseph an identity as the favored son, adding to the jealousy of the brothers.
The garment became the center of the narrative as it was used to deceive.  Before throwing Joseph into the pit, his brothers stripped him of his coat, thus removing his identity as the favored son.  It was the symbolism of the coat that the brothers wanted to destroy as well as Joseph. Intending to deceive Jacob, they dipped the coat in blood; ‘Then they sent the tunic of many colors, and they brought it to their father and said, “We have found this. Do you know whether it is your son’s tunic or not?”  Genesis 37:32.
When Jacob was presented with the coat, the deception was complete. By allowing Jacob to equate the coat with Joseph’s identity; if the coat was bloody, then so must Joseph be; became the deception.   Fraudulent evidence led Jacob to the wrong conclusion.  The brothers had deceived. Jacob tears his garments, a symbolism of grief and puts on sack cloth.
In Genesis 38:14-16  Tamar disguises herself as a prostitute; ‘So she took off her widow’s garments, covered herself with a veil and wrapped herself, and sat in an open place which was on the way to Timnah; for she saw that Shelah was grown, and she was not given to him as a wife. 15 When Judah saw her, he thought she was a harlot, because she had covered her face. 16 Then he turned to her by the way, and said, “Please let me come in to you”; for he did not know that she was his daughter-in-law.’
Tamar used garments to deceive Judah.  She does not verbally lie but rather allows her clothing to lie for her.  The clothing becomes her identity. Her deception begins as the fraudulent evidence led Judah to perceive her as a harlot.
But what was her motive? It was the deception from Judah.  Scriptures state that God was displeased with Judah’s sons and we know that it was God who killed two of Judah’s sons, yet Judah negates to realize this. He suspects that Tamar is a “lethal woman,” a woman whose sexual partners are all doomed to die. So Judah is afraid to give Tamar to his youngest son, Shelah. As a result, Judah deceives Tamar. He sends her to live as “a widow” in her father’s house, until Shelah is grown. Tamar is waiting for Shelah to grow up. But after time passes, she realizes that Judah is not going to allow that union. She was deceived.
In Genesis 39:11-16 Potiphar’s wife lusts Joseph (‘Now Joseph was handsome in form and appearance’. Genesis 39:6). She grabs his garment as she commands him to lie with her. Genesis 39:12 ‘…that she caught him by his garment, saying, “Lie with me.” But he left his garment in her hand, and fled and ran outside.’  She then uses the garment to try to frame Joseph and deceive her husband. Again fraudulent evidence leads to the deception.
Fraudulent evidence is false evidence, fabricated evidence, forged evidence or tainted evidence to sway the outcome. Leviticus 19:11 speaks harshly of this, ‘You shall not steal, nor deal falsely, nor lie to one another.’ And Proverbs 20;17 ‘Bread gained by deceit is sweet to a man, but afterward his mouth will be filled with gravel.’
The incidents in this parsha are powerful stories of deception and the antitheses of what God would have us do. The mystery of Elohim’s presence is undeniable.
There is a garment for us today. It is the garment of praise. And it is for His glory:
Isaiah 61:3:
“To console those who mourn in Zion,
To give them beauty for ashes,
The oil of joy for mourning,
The garment of praise for the spirit of heaviness;
That they may be called trees of righteousness,
The planting of the Lord, that He may be glorified.”
We must be prayerful and mindful of the descents in our lives for if we obey and trust in God, these contain a link to the ascent which is favor from YHWH. Joseph didn’t control his destiny, rather he controlled how he operated in his destiny – and he became a ruler clothed in a garment of fine linen.
May you be encouraged ~ Rabbi Jay 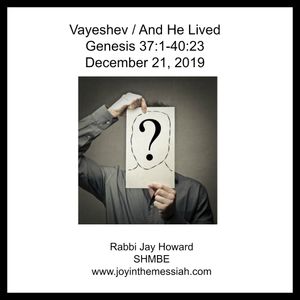