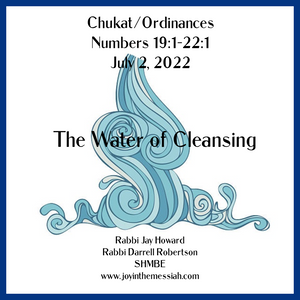 The Waters of Cleansing 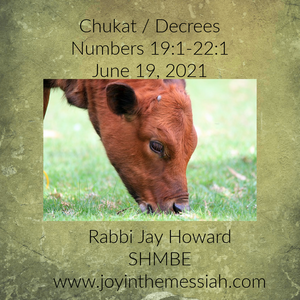 The Red Heifer and The Rock…

Chukat begins with the ordinances for the sin offering of the red heifer, which is called the strange ritual. Unlike most sin offerings, the red heifer was to be female, not male.  This can allude to the offering of ‘giving’. The purpose of the sin offering of the red heifer was to cleanse/make pure those who had come into contact to death: a metaphor of great proportions – to reconcile man back to God.
The ashes of the red heifer are to be gathered by the clean/pure, to be contained in a clean place, to use in water for cleansing for the purification of sin. The rites of the red heifer make the impure pure and the water is for the cleansing, the purification of sin.
Moses is once again faced with a grumbling congregation for there is no water. They gathered against Moshe, blaming him for their exit from Egypt only to be brought to the wilderness to die. Moses and Aaron fall on their faces before God and He commands Moses to speak to the rock, to bring forth water for the congregation.  We know the story; Moses can’t control himself and strikes the rock.
Numbers 20:10-12 “Hear now, you rebels! Must we bring water for you out of this rock?” 11 Then Moses lifted his hand and struck the rock twice with his rod; and water came out abundantly, and the congregation and their animals drank. 12 Then the Lord spoke to Moses and Aaron, “Because you did not believe Me, to hallow Me in the eyes of the children of Israel, therefore you shall not bring this assembly into the land which I have given them.”
Is there a connection between the ritual of the red heifer and the rock? The red heifer was to give life, making the impure pure and reconcile back to God. The Rock is the solidarity of God and water is the living substance.
The Life~
John 10:10-11 “I have come that they may have life, and that they may have it more abundantly. 11 “I am the good shepherd. The good shepherd gives His life for the sheep.”
John 14:6 “Yeshua said to him, “I am the way, the truth, and the life. No one comes to the Father except through Me.
1 John 1:7 ‘But if we walk in the light, as he is in the light, we have fellowship with one another, and the blood of Yeshua His Son cleanses us from all sin.
Hebrews 9:14 ‘How much more will the blood of Messiah, who through the eternal Spirit offered Himself without blemish to God, purify our conscience from dead works to serve the living God.’
The Rock~
Isaiah 48:21 ‘And they did not thirst when He led them through the deserts; He caused the waters to flow from the rock for them; He also split the rock, and the waters gushed out.’
1 Corinthians 10:2-4 ‘…all were baptized into Moses in the cloud and in the sea, 3 all ate the same spiritual food, 4 and all drank the same spiritual drink. For they drank of that spiritual Rock that followed them, and that Rock was Messiah.
Isaiah 8:14 ‘Then He shall become a sanctuary; but to both the houses of Israel, a stone to strike and a rock to stumble over, and a snare and a trap for the inhabitants of Jerusalem.’
Matthew 21:42  ‘Yeshua said to them, “Did you never read in the Scriptures, ‘The stone which the builders rejected, this became the chief corner stone; this came about from the Lord, and it is marvelous in our eyes?’
Matthew 7:24-25 ‘Therefore whoever hears these sayings of Mine, and does them, I will liken him to a wise man who built his house on the rock: 25 and the rain descended, the floods came, and the winds blew and beat on that house; and it did not fall, for it was founded on the rock.’
The Pure Water~
Ephesians 5:26  ‘That He might sanctify her, having cleansed her by the washing of water with the word…’
John 4:13-14 “Yeshua answered, “Everyone who drinks this water will be thirsty again, but whoever drinks the water I give them will never thirst. Indeed, the water I give them will become in them a spring of water welling up to eternal life.”
John 7:37-38  ‘On the last day, that great day of the feast, Jesus stood and cried out, saying, “If anyone thirsts, let him come to Me and drink. 38 He who believes in Me, as the Scripture has said, out of his heart will flow rivers of living water.”
Revelation 22:17  “The Spirit and the bride say, “Come!” Let the one who hears say, “Come!” And let the one who is thirsty come, and the one who desires the water of life drink freely.”
Numbers 20:12 states the consequences for Moses striking the rock ‘Then the Lord spoke to Moses and Aaron, “Because you did not believe Me, to hallow Me in the eyes of the children of Israel, therefore you shall not bring this assembly into the land which I have given them.”
Cleanses, pure, purified, water, rock and life; everything connects. As Moses, do we ever strike The Rock in our unbelief or rebellion? God said to Moses ‘Because you did not believe Me to hallow (make holy/kadosh) Me… referencing that Moses made (tried to make) God common.  We can never make God common, but by our unbelief and rebellion we make ourselves common and impure. We defile ourselves.
1 John 3:4 states ‘Everyone who practices sin also practices lawlessness (torahlessness); and sin is lawlessness (torahlessness).
We strike The Rock when we don’t understand the concept of Yeshua as ‘with God’ Elohim in the beginning, with creation, and the Creator of Shabbat and the author of The Torah.  When we deviate from the totality of The Word, we strike The Rock, as if to say, ‘I am angry, I will not hallow You.  I will do things my way.’
Psalm 98:2 ‘Adonai has made His salvation know.’ 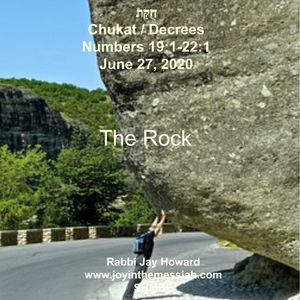 In Chukat we learn a valuable yet somewhat obscure lesson regarding striking the rock verses speaking to the rock, and about Moses; the faithful shepherd. He has led the Israelites for forty years and is told that he will not live to cross the Jordan to enter the promised land and although the consensus seems to tie the sin of Moses’ to striking the rock verses speaking to the rock, there are so many variables and opinions.
Almost forty years have passed since the exodus and most of the generation who remembered Egypt have died as has Miriam. The Israelites are close to the Promised Land, in their new camp, however without water. So, they default and complain in Numbers 20. “If only we had perished when our brothers perished in the presence of the Lord. Why have you brought the assembly of the Lord into this wilderness for us and our livestock to die? Why did you take us up from Egypt to bring us to this vile place, where nothing grows, not corn or figs, not vines or pomegranates? There is not even any water to drink.”  This is all too familiar, as they whine to die – again - and Moses and Aaron fall on their faces before the Lord as if to say, ‘We’ve had it!’
God commands Moshe to speak to the rock, Moses strikes the rock instead right after he rebukes the Israelites. Can’t you just hear it?
Numbers 20:7-12 ‘Then the Lord spoke to Moses, saying, 8 “Take the rod; you and your brother Aaron gather the congregation together. Speak to the rock before their eyes, and it will yield its water; thus you shall bring water for them out of the rock, and give drink to the congregation and their animals.” 9 So Moses took the rod from before the Lord as He commanded him. 10 And Moses and Aaron gathered the assembly together before the rock; and he said to them, “Hear now, you rebels! Must we bring water for you out of this rock?” 11 Then Moses lifted his hand and struck the rock twice with his rod; and water came out abundantly, and the congregation and their animals drank.’
Immediately, the consequence is given: ‘12 Then the Lord spoke to Moses and Aaron, “Because you did not believe Me, to hallow Me in the eyes of the children of Israel, therefore you shall not bring this assembly into the land which I have given them.”
Was Moses simply carrying out the previous command in Exodus 17:6 where God does command him to ‘strike the rock?’  Or was he overcome with irritation? What was the reason behind the two different instructions, to strike then to speak?
One tradition teaches that the previous generation was slaves; they had to be taught everything, especially taught to leave a slave mentality. But the other generation, were born free in the wilderness. He was facing a new generation. One set of people needed a leader, the latter needed a teacher. The people he confronted the first time were those who had spent much of their lives as slaves in Egypt. Those he now faced were born in freedom in the wilderness. They were now responsible for their actions. They ‘knew’.
Is this not so unlike our conquest in life?  We are in bondage, slaves of an Egypt system. We murmur, we grumble, and we complain; ‘there is no water!’ We have to be led out of Egypt, as if we were slaves. We are given the Living Water, and we surrender to God. We are now responsible to learn, to grow and to change. We are not to strike The Rock anymore, for we have already been giving a taste of The Living Water which has sustained us. Yet, still we murmur. But we know what the Living Water is, and now it is our sole responsibility to keep growing. So, we ‘speak’ to The Rock which contains the Living Water.
1 Corinthians 10:1-4 ‘For I want you to know, brothers, that our fathers were all under the cloud, and all passed through the sea, and all were baptized into Moses in the cloud and in the sea, and all ate the same spiritual food, and all drank the same spiritual drink. For they drank from the spiritual Rock that followed them, and the Rock was Christ.’
Psalm 114:7-8 ‘Tremble, O earth, at the presence of the Lord, at the presence of the God of Jacob, who turns the rock into a pool of water, the flint into a spring of water.’
John 4:9-14 ‘Then the woman of Samaria said to Him, “How is it that You, being a Jew, ask a drink from me, a Samaritan woman?” For Jews have no dealings with Samaritans. 10 Jesus answered and said to her, “If you knew the gift of God, and who it is who says to you, ‘Give Me a drink,’ you would have asked Him, and He would have given you living water.” 11 The woman said to Him, “Sir, You have nothing to draw with, and the well is deep. Where then do You get that living water? 12 Are You greater than our father Jacob, who gave us the well, and drank from it himself, as well as his sons and his livestock?” 13 Jesus answered and said to her, “Whoever drinks of this water will thirst again, 14 but whoever drinks of the water that I shall give him will never thirst. But the water that I shall give him will become in him a fountain of water springing up into everlasting life.”
Do we strike the rock?  Or do we speak to The Rock? 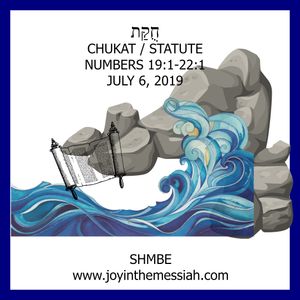