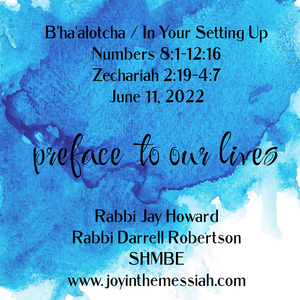 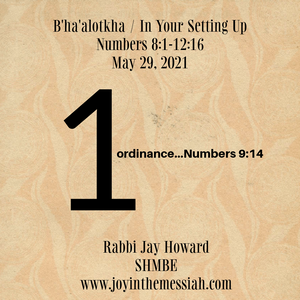 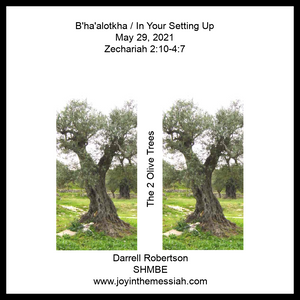 ZAYIN -Sword of the Spirit, Dagger, Weapon or Seed.
RESH - Head, Chief, Beginning, Highest, Most Important’
AYIN - Eye, to See, Understand, Experience, or to be Seen, Window of the soul.

One Light…
Beha’alotcha contains the instructions of the lampstand, dedication of the Levites, the instructions for the second Pesach, the making of the two silver trumpets, the departure from Sinai,  manna, quail, murmuring and the dissension of Aaron and Miriam.
This parsha opens with the directions of the lampstand. ‘And the Lord spoke to Moses, saying: 2 “Speak to Aaron, and say to him, ‘When you arrange the lamps, the seven lamps shall give light in front of the lampstand.’ ” 3 And Aaron did so; he arranged the lamps to face toward the front of the lampstand, as the Lord commanded Moses.’
The importance was to arrange the lights so that the light shines in front of the menorah. Not behind it, but in front of it. What a metaphor for our lives.  The menorah is the main component, and the seven lights shine from it. There is one light and we are to shine from it, outwardly, for the Main Light does not need our light, but rather we need the base of The Main Light and we represent that true One Light.
Psalm 119:105 ‘Your word is a lamp for my feet, a light on my path.
Numbers 6:24-26 “The Lord bless you and keep you; the Lord make his face shine on you
and be gracious to you; the Lord turn his face toward you and give you peace.”
Isaiah 60:1 ‘Arise, shine, for your light has come, and the glory of the Lord rises upon you.’
John 8:12 ‘Then Yeshua spoke to them again, saying, “I am the light of the world. He who follows Me shall not walk in darkness, but have the light of life.”
Acts 13:47 ‘For so the Lord has commanded us: ‘I have set you as a light to the Gentiles,
That you should be for salvation to the ends of the earth.’
We cannot shine His light without walking in the truth, His ways. The light of the menorah alludes to the Torah, the light of which is the eternal flame, lighting the pathway of men. The whole and truth of God’s instruction is to be the spiritual light of man.  King Solomon speaks of God’s grace in giving His Torah His people:  Proverbs 6:23 - “For the commandment is a lamp and the teaching a light, and the reproofs of discipline are the way of life.” God’s commandments are clear as they “enlighten the eyes” as Psalm 19:8 states.
In chapter 11 the people complain and long for the lifestyle they had in Egypt.  Interesting that God consumed the people outside the camp‘…when the people complained, it displeased the Lord; for the Lord heard it, and His anger was aroused. So the fire of the Lord burned among them, and consumed some in the outskirts of the camp.’ Numbers 11:1.
However, the complaining continues at which point Moshe pleads to God ‘I am not able to bear all these people alone, because the burden is too heavy for me. 15 If You treat me like this, please kill me here and now—if I have found favor in Your sight—and do not let me see my wretchedness!” Moses seems to blame God, blames himself and asks for death in a self-pity mentality.
In Numbers 12 Miriam and Aaron are filled with jealousy and speak negatively about Moshe. Miriam is stricken with leprosy, where she is placed ‘outside’ the camp.  Leprosy is a form of death, caused by lashon ha’ra, and therefore, as in Numbers 11:1, she is outside the camp.
These three incidents are the polar opposite of the light coming from the Menorah and the seven lights shining in front of the One True Light. These three incidents represent the flesh, the human mindset of self, where the light represents the oneness of Elohim.
Haven’t we all murmured? Haven’t we all had self-pity?  Haven’t we all spoken negatively regarding someone?  Are we consumed with jealousy?  Do we let entitlement and desires of the heart rule our thoughts?
Adonai seems to preface this Torah portion with the Light of the World, His perfect Light, and the perfect example for us.  Psalm 119:130 ‘The entrance of Your words gives light; It gives understanding to the simple.’  Psalm 37:5-6 ‘Commit your way to the Lord, trust also in Him, and He shall bring it to pass.
He shall bring forth your righteousness as the light, and your justice as the noonday.’
May we find favor from Elohim as we walk in His light and shine in the darkness. 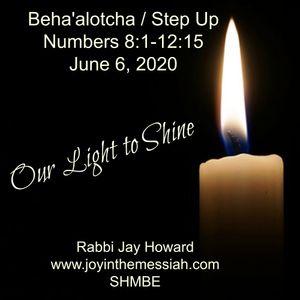